Dragon claws OSRS, one of the most iconic pieces of equipment amongst the PK-ing community in old school RuneScape, when first added to the game, they were rather overpowered, people who were able to  afford them at the time, enjoyed that aspect, as they could easily one shot lower combat players.

But a mass of the people weren’t amidst the lucky one who can get their hand on them, which prompted an outcry in the community for them to downgraded to, but instead of a simple nerf at the time, they were hastily removed from the game as a whole.While they had a rather short stay in the game at the time, they did have a great impact, to commemorate that, Diango’s Claws were added to the store of one merchant NPC, who sales primarily toys and gag items, they were added as an April Fools joke during the 2015 event.Several years later, there was another uproar mid the player killing public, as the game grew and more people dwelled in this aspect, it became obvious that people would pick only the best builds and weapons for the task at hand, the problem was that the weapon pool was rather small, not a lot to be picked from, so the activity turned a bit stale.

That’s until  the Chambers Of Xerics was introduced, with it a new slope of different types of weapons, including the new version of the dragon claws.
Although not quite the same as it’s predecessor, still quite the powerful weapon, providing a high slash bonus of 57, Strength bonus of 57 and a low attack speed interval of only 2.4 sec, it quickly became a favorite  throughout the community. But the base stats weren’t what made them special in the first place, their what made them special was, well… their special attack.
Slice and Dice, it allows you to hit your target four times in succession at the cost of 50% of the special attack bar, meaning it could be used twice in a row, surely a great finisher that would be hard to avoid if even two of those hits land.

While not nearly as expensive as they once were, still pretty valuable on the Grand Exchange, but buying them through the GE isn’t the only method of obtaining them, if you would like to gets your hands fitted with this legendary pk-ing weapon, you can purchase them from us: https://crazy.gold/buy-and-sell-runescape-gold/dragon-claws/ 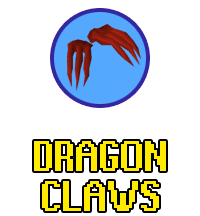