OSRS Black dragons are used as a way of making money and that is why you can see them in some money making guides. But don’t forget that just like the other dragons in OSRS, the Black Dragon is a very powerful monster.

An OSRS Black dragon in the slayer only area can only be killed when assigned, you will be stopped by Slieve if you attempt to attack them off-task. The slayer area can be accessed by steps near the entrance. The common area requires you to have a dusty key or 70 Agility to reach the dragons.

The Evil Chicken’s Lair has the most out of any common area four OSRS Black dragons. Accessing this area requires a raw chicken offered to the chicken shrine in Zanaris. Also, it will require you to start Sir Amik Varze’s subquest in Recipe for Disaster, and until the dragon token is redeemed.

Two OSRS Black dragons can be found in the Corsair Cove Dungeon. To access this area, you need to complete the Dragon Slayer II quest, the best thing about this dungeon is that it’s the closest location to a bank.

Antipoison may be needed because of the presence of poison spiders near the Black dragons. There are also three dragons in the Revenant Caves, these OSRS Black dragons are slightly stronger from those found in the Lava maze, and they are the only ones that reside in a Multicombat area.

How to Kill The Black Dragon?

For killing black dragons It is recommended to use a high-level Ranged weapon to kill these creatures because they are weak to bolts. Another useful weapon that you can bring with you is Dwarf multicannon but first, you have to finish the Dwarf Cannon quest or you can buy the cannon and cannonballs from the GE.

Pick a location to fight the Black dragons, set up your Dwarf cannon on the floor in a safe spot. Stand in the northeastern corner of your cannon and fire, this will ensure that 95% of the time you will be getting double hits on the black dragon. if the cannon is not double hitting, try running two steps away and back in between your attacks to reposition the OSRS Black dragon.

To achieve the best experience per hour for ranged, try to tag all the newly spawning OSRS Black dragons so they can get double hit from the cannon as soon as possible. If you are trying to kill OSRS black dragons with melee stand in the northeastern corner of your cannon and wait for the Black dragon to come to you, because if you move the Black dragon will move out of the double hit spot.

For melee setup Viggora’s chainmace, Avernic defender, Slayer helmet, Amulet of torture, bring Expeditious bracelet but if you want you can use Barrows gloves, Mythical cape, and Dragon boots if you don’t want to risk too much in case you die. If you want to bring a ring it’s best if you use a Tyrannical ring. 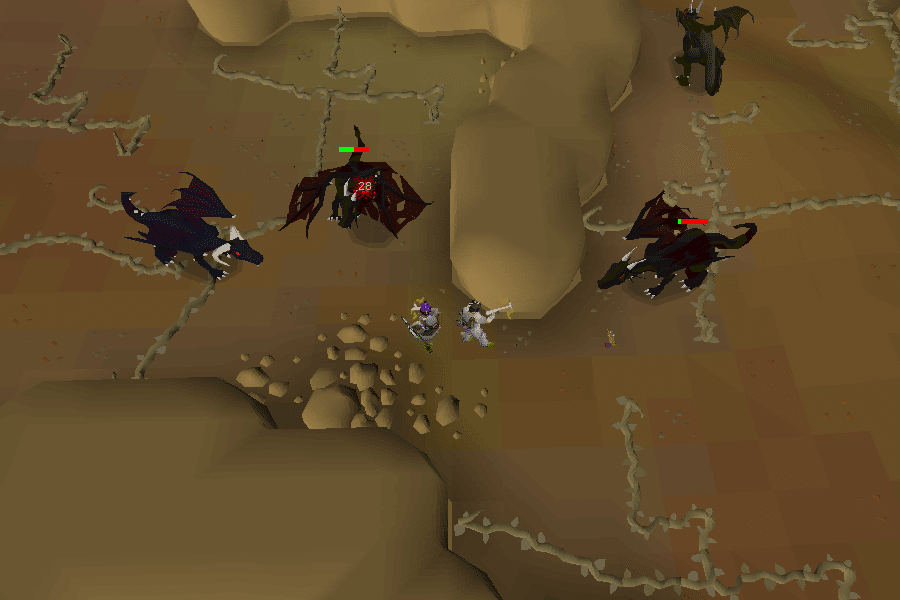