Do you want to learn how to be a pirate? Well, this quest is made for you my friend. OSRS Cabin Fever quest is a part of the Pirate quest series, in this quest the pirate Bill tries to make the journey from Port Phasmatys to the pirate enclave of Mos Le’Harmless.

He’s looking to recruit anyone eager to become a pirate to help him sink the enemy before he ends up swimming home. He’s offering a lot more than a shilling to join his crew. Do you want to become part of the Bill Teach crew?

To start this OSRS Cabin Fever quest you need to travel to Port Phasmatys. Speak with Bill Teach in The Green Ghost inn. He needs a pirate to help him leave the port, but none will sail with him, not even his crew.

Walk to the east towards the docks and enter the most eastern ship, talk to Bill again and say let’s go captain to start sailing for Mos Le’Harmless and begin your journey as a pirate. Then a cutscene will start where an enemy pirate ship starts firing on you and they will destroy the ship’s hull and cannons.

Use the fuse on the powder barrel on the main deck, then use your tinder box on the fuse to light it. Climb back on the main mast using the net, and using a rope, swing back over to your ship and talk to Bill.

Climb down to the bottom deck and search the repair locker, take six repair planks, 30 tacks, 3 swamp paste, and a hammer. Use a plank on each hole in the ship, click on the hole again to waterproof it. When that is done go back to the main deck and talk to Bill.

Teach Them a Lesson

Go back to the enemy ship and collect their treasure, then climb down the enemy ships ladder. Steal from the chest located to the north, search the crate and ransack the barrel for enemy plunder. You need 10 plunder to continue the quest, so you need to log out of the game and log back in to respawn the plunder.

Collect more until you have 10 pieces, climb back up the climbing net, and use a rope to go back to your ship. Then climb down the ladder and use the plunder on the open chest at the end of the ship. Go back to the main deck and talk to Bill.

Finally, Bill wants you to prepare a send-off for the enemy. He wants to give the enemy pirates a blast, from the cannon. Head back down the ship and take a cannon barrel from the gun locker. Climb back up and use the cannon barrel on the broken cannon to replace it and talk to Bill again.

Then go down to the bottom deck and search the gun locker for a ramrod, 4 fuses, and a cannon canister. Return to the main deck, and choose the take-powder option from the powder barrel next to the cannon.

If you miss, use the ramrod on the cannon to clean it out and then repeat the steps, until you score a hit. If you don’t clean the cannon, it will explode from the previous unused gunpowder.

When this happens, replace the broken barrel with a new one from the gun locker. Try not to fire the cannon immediately after attaching the fuse. This can cause multiple misses. Count to 3 before firing. When you hit the pirates with the canisters, talk to Bill.

He tells you to sink the enemy pirate ship by blasting holes in its hull, three would be enough. Go down below, and search the gun locker to take three cannonballs. Climb up on the main deck, clean the cannon out with a ramrod and then repeat the steps until you have hit the enemy ship three times.

Following your third hit of the enemy pirate ship, you see a cutscene with Bill Teach talking with Mama Le’Fiette in The Other Inn. Bill then thanks you and gives you a Book o’ piracy, to add “pirate” to your vocabulary as your ineptitude at speaking “pirate” annoyed him to no end in the voyage. 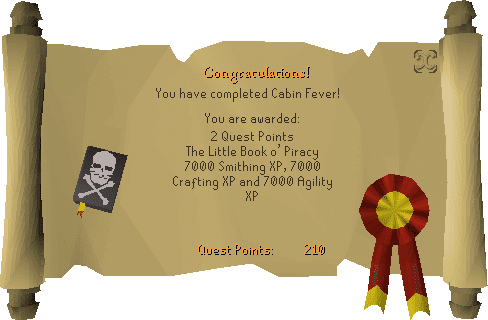