At the beginning of the OSRS Enakhra’s Lament quest, you need to help an old sculptor named Lazim whose days of making art are over, and now all he can do is carp at adventurers as they make a statue for him in the desert.

You can start this quest by speaking with Lazim, who is located just south of the Bandit Camp and west of the Jaldraocht Pyramid. The fastest way to get there is by taking a carpet ride to Bedabin Camp and running south.

After you speak to him you need to give him 32 kilograms of sandstone. There is a sandstone mine next to Lazim that you can use, in case you don’t have it already. You don’t have to deliver the 32 kilograms in one go, you can do it partly or in bits.

Talk to him again, and then use it on the flat ground next to him. He will ask you to give him 20 kilograms of sandstone for the body if you already have it just talk to Lazim again to give him the required amount and he gives you the 20kg sandstone block.

It doesn’t really matter which one you choose because the outcome will always be the same. To make the head you will need to mine 10 kilograms of granite. If you are planning to complete the King’s ransom quest, get one extra piece of granite.

Use your chisel on one of the 5 kg pieces and sculpt it into a head in which you said to Lazim. If you are planning on obtaining soft clay during the quest, mine some clay now as well. Use the head on the statue.

It will fall through the ground, taking you and Lazim, and the statue with it into an ancient temple below. The statue will break. Talk to Lazim, take the silver M sigil off the pedestal, and use your chisel on the statue to get a stone left arm, stone right arm, stone left leg, and stone right leg, which you’ll use as keys to unlock the doors to the rooms.

Run north until you find a door, click on the door to open it and this will trigger a cutscene. Watch the cutscenes of Enakhra and take the Z sigil, R sigil, and K sigil, which together with the M sigil make up the consonants of ‘Zamorak’.

Then go through the door and follow the corridor until you see a pedestal in the next room. Make sure that you take the Z sigil of the pedestal and keep running west. Continue to do this until you have all the sigil and go towards the middle and use the sigil to unlock the door.

Unlock all four doors from the inside, and then go up the ladder. There is a pedestal in the room you are in. Use your soft clay on the pedestal to make a camel mould (p) and then use the chisel on the remaining piece of medium-sized granite (5 kg) to make a new stone head.

Place this granite head into the pedestal and this will trigger another cutscene. There are four globes that you must light before you proceed north, based on the four classes of the Ancient Magic spells.

After all four globes are lit, go north through the barrier. Go up the ladder. If you go south, you’ll see a Boneguard. Talk to it, then cast Crumble Undead. Your Crumble Undead cast must hit the guard.

You can now climb over the pile of bones, or search the pile of bones for five Big bones. Climb down the ladder. You’ll see another bone guard. This time, turn on Protect from Melee and talk to it.

It will try to attack you a couple of times and then, it will be impressed. It will tell you that it was put under Enakhra’s control. Agree to seal her in her temple by building a wall.

Take three pieces of sandstone from the pile of bricks, use the sandstone on the wall, and then use your chisel on the wall to trim it. Once you’ve built the wall, talk to the bone guard.

The bone guard will reveal himself to be another Mahjarrat, Akthanakos. He follows Zaros and is Enakhra’s archrival.

Enakhra will destroy your wall, and both individuals transform into their true form, the Mahjarrat. They will then teleport away to have their final battle in the North.

Rewards From The OSRS Enakhra’s Lament 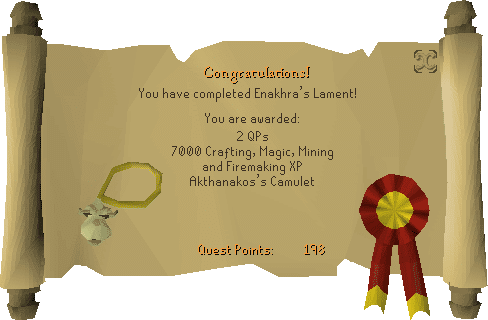