The Fairy Queen should be awake and back in charge of the Lost City by now, but what is happening in Zanaris? Why hasn’t the Fairy Godfather abdicated the throne? What is happening to all the fairy inhabitants and where has Fairy Nuff gone? To find out what happened you must unravel this mystery and help the queen.

Quest and Skill Requirements for The OSRS Fairytale 2

To start, talk to Martin the Master Gardener in the Draynor Market. He will tell you to come back once his crops are grown, so wait until your quest menu says his crops have had plenty of time to grow, so around five and a half minutes of logged in time.

Talk to him again. He will tell you that there is still something wrong with the crops, not believing your story about fairies and accusing you of creating this problem. Agree to investigate for him.

Now you need to head to the swamp and you need to go to the little shack to get to Zanaris. Keep in mind that your Dramen or Lunar staff must be equipped before you enter the shack or will not be able to go to Zanaris. Head toward Fairy Nuff’s grotto, just north of the bank.

Walk in, and you’ll see a short cutscene. On the ground and next to one of the potion shelves is Fairy Nuff’s certificate which you need to pick up. Talk to the Fairy chef, south of the bank.

She will tell you that she’s seen similar inscriptions on a sign near the mysterious ruins, the Cosmic Altar ruins in southern Zanaris, next to the tanglefoot area. The inscriptions are south of the altar on the wall next to a tree.Read the rune temple sign, now by using this we can decipher the back of the certificate.

The certificate reads: “The Godfather attacked us. We have fled to safety. If you are loyal to her majesty, find us by using the co-ordinates “AIR”, “DLR”, “DJQ”, “AJS”. ”

Talk to the Fairy Godfather in the Fairy Queen’s throne room located next to the slayer master. Ask him what happened to the Queen, to which he visibly starts panicking and rushes to say that he will create a search party for her.

Ask him both questions, and then agree to return to him once you’ve found the queen. The Godfather permits you to use the fairy rings to locate the queen. He asks you to speak to the Co-ordinator outside the room to learn more about the rings.

After talking to the Co-ordinator and being informed of the vast history of the fairy rings and the queen, head south-west to the fountains where you should see a fairy ring.

Click on Configure Fairy ring, now we need to go to AIR (Islands: South of Witchaven). To dial a fairy ring address you have to spin the wheels on to the letter you want for the address, then click on “Teleport to destination”.

The Nuff’s certificate must be in your inventory for this to work. Then continue dialing the next sequence DLR, DJQ and the last one is AJS (Islands: Penguins near Miscellania, or Queen’s location).

If you end up on an island with some penguins, you either made a mistake entering the codes or you do not have Nuff’s certificate. You may also have skipped deciphering the certificate’s message or simply missed one code in the sequence.

You should hopefully be in the Fairy Queen’s new location. Just go up the path, and head to the north-eastern room. Talk to Fairy Nuff who, along with Fairy Very Wise, informs you that the queen is not well because the Godfather has hurt her by not returning her magic secateurs.

As her essence is drained, she cannot retaliate without obtaining the secateurs, which you accept to bring back. Head back to Zanaris, and pickpocket the Fairy Godfather. This requires level 40 Thieving to be completed successfully. If you fail, you will be teleported outside Zanaris.

A quick way to get back to Zanaris is the Salve graveyard teleport which will place you a few strides away from the Canifis fairy ring.Try pickpocketing from behind or the side, and make sure neither of his henchmen are looking directly at you. You should get a golden Queen’s secateurs.

Also, at this point, you will see orks patrolling Zanaris. When you take the secateurs from the Fairy Godfather, go to the Fairy rings back to Queens hideout. Use the same codes to go back, just right-click configure and you’ll see a little box that says travelogue on the right-hand side of your screen.

But this time when you click on the location it will automatically put the code in for you.

Talk to Fairy Nuff, and give her the secateurs. She will use them to rejuvenate the queen, but they do not work completely. Nuff tells you that she needs a certain magic essence potion to replenish the queen’s missing life energy.

To make the potion, you need to collect some Star flowers and gorak claw powder. Return to the fairy ring and use the code CKP, which transports you to a cosmic plane. Move around for about two minutes whilst the Star flowers grow.

You can pass the time by talking to the Cosmic Being who lives there, contemplating the mysteries of the universe.Pick a star flower when ready, and add your harvest to the vial of water.

Return to Zanaris, and withdraw any armour and weapons, along with around 10 pieces of good food. Goraks are very accurate, so take the best melee armour you have. They are aggressive, but luckily, they are not located in a multi combat area, therefore you can only fight one at time.

However, by remaining in the fairy ring, they will not be aggressive until they are attacked. Also the Goraks hit through prayer so the Protection prayers do not have any effect. You can lower their chances of hitting you by wearing high crush-resistant armour such as chainmail.

Use the sequence DIR to get to another plane full of goraks. You must have the certificate in your inventory for this to work! Kill them by eating food when necessary and drink restore potions if needed until you get a gorak claw.

To leave, equip your staff of choice and teleport to Zanaris using the right-click option on the fairy ring. Crush the claw with a pestle and mortar to get gorak claw powder. Mix the star flower and gorak claw powder into a vial of water to make a magic essence potion.

Return to the Resistance Hideout, use a dose of the magic essence potion on the queen, who finally regains her senses. As the queen angrily prepares to return to Zanaris and take back her throne, Fairy Very Wise and Fairy Nuff remind her that the Fairy Godfather has thugs and orks at his disposal.

His “army” has her easily outclassed, compared to Her Majesty’s small band of loyalists. The queen realises the flaw in the plan, and accepts the advice and allows the Fairy Godfather to remain Zanaris’ ruler for the time being.

Rewards For The OSRS Fairytale 2 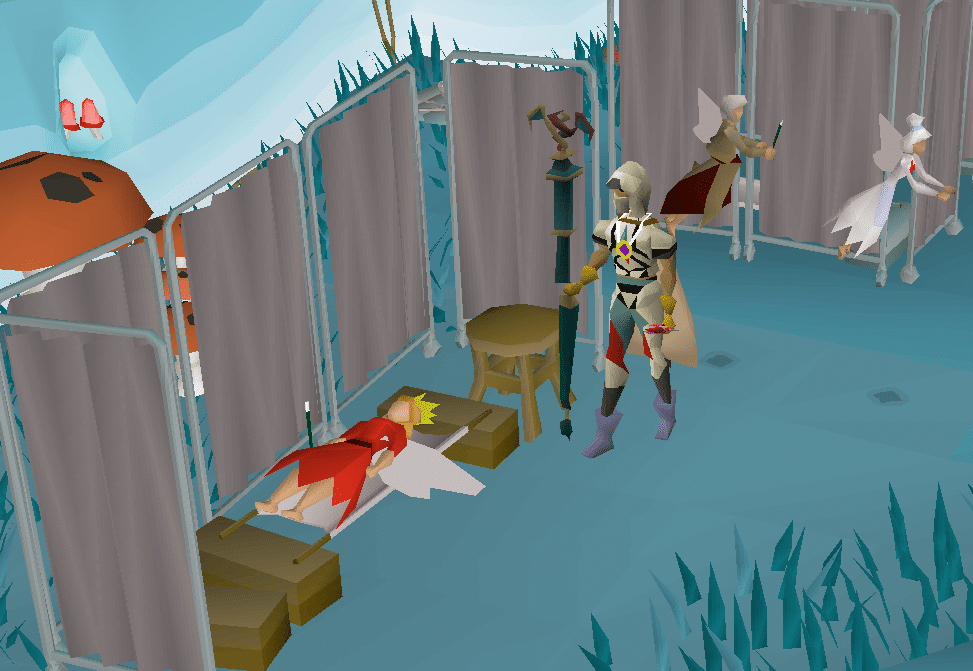