In this OSRS Haunted Mine quest, as you may have noticed from the title, we are going to talk about a scary ghost haunted place. There are some rumors about an abandoned mine in the south of Morytania.

People say that there is an unusual material, hidden in the depths of the mines, and that is somehow linked to the desolation and fear that now surrounds the place. Are you brave enough to enter into that mine and find out the truth behind the rumors?

Quest and Skill Requirements For The OSRS Haunted Mine

The quest requirement is to complete the Priest in Peril quest. The skill needed for the OSRS Haunted Mine quest are:

The fastest way to reach the Abandoned Mine is by teleporting to Mort’ton with a Mort’ton teleport scroll which you can buy from the Grand Exchange, or by using a Shades of Mort’ton minigame teleport.

To start the quest talk to Zealot located in the area north of the Abandoned Mine. Tell him that you are on the path of Saradomin and he will tell you about the secret cave and the salve amulet. He has a key but will refuse to give it to you, so you need to pickpocket him to get the Zealot’s key.

Walk south of Zealot to the cart track and climb over the second-to-last cart and walk past the last cart to enter the mine. Go west until you reach the crawl-through cart tunnel, then go south and enter the next tunnel. Once inside, go east until you find a ladder and go down it.

Head directly east, and go down another ladder. Follow the path to the cart track running north to south. Do not get hit by the mine cart that is moving along on the track. Wait for the cart to head south. Follow the cart south and wait in the safespot (alcove) on the west side of the track.

When the cart passes north, run south to the ladder and climb down. Next to the ladder, you will find glowing fungus pick one and continue running northwest. On the west side of a pool, alongside four crates, you should find a searchable minecart.

Use your fungus on the cart and head north and then west to the point settings which operate the cart system. Click the points settings panel on the northern wall of the corridor. Pressing the red start button sets the cart system in motion.

The objective is to get the cart from the start position on the left to the exit point at the ladder in the top right corner. Look at the directional arrows highlighted in red in the picture. Take a picture of your map to see which levers need to be pulled in order to match your track map to the solution map.

Once you think you know all the letters that are wrong, close the interface. Go back to the searchable minecart from there go east and then north until you find the first five levers. Click the levers that correspond to the intersections on your track map that need to be switched.

Now returning to the track map panel and continuing north-west. Again, click the levers that correspond to the intersections on your track map that need to be switched. If you right-click on them and examine them you will find that these are the levers from F to K.

Go back to the track map. Check to make sure that the route on your map directs the mine cart to the ladder. Then operate the mine cart by pressing the red start button, and the map will show the path of the mine cart.

If a setting is incorrect, the cart ends up in the wrong location. When that happens, the glowing fungus is removed from the cart. In that case, pick another glowing fungus and put it in the cart. Operate the appropriate levers to fix the problem and hit the red button again. The location of the cart must be next to the north-west stairs.

Track The Mining Cart From The OSRS Haunted Mine

Water Valve From The OSRS Haunted Mine Quest

At this point in the quest, you need to have Zealot’s key, good armour, and a good weapon, while having plenty of high-healing food and an emergency teleport in your inventory. In addition to this, a super energy potion, or even better yet, a stamina potion, is highly recommended since killing the ghost requires a lot of running!

If you don’t have these items in your inventory go to the bank, otherwise continue the quest. Go back up the ladder. Head all the way east past a ladder and then south past a moving cart. Climb down the ladder to arrive at Cave Level 4.

Head south-east down the eastern corridor. Pick up the chisel from the spawn on top of a crate if you did not bring one. Locate the water valve on the east side of the large pipe. Use Zealot’s key on the valve to activate the water flow.

A ghost will appear and will try to shut off the valve. Run quickly around the water pipe system to the elevator lift and “Go down Lift” to Cave Level 5. The elevator remains operational after the initial activation, so Zealot’s key is no longer needed.

Zealot can be pickpocketed again to obtain another key. The elevator will drop the player into a pool of water. From the elevator, walk south onto the track and follow it to the east. Proceed down the staircase. With the glowing fungus, the cave will be properly lit.

Go west through the door to a big room with cranes and carts. This room is where the boss fight will take place. Do not take the key until you are completely ready to begin!

The max hit of the boss is 15, during the fight, you will notice that there are a lot of minecart tracks. Do not stand on them because one every one of the tracks there is a moving cart and if you get hit you will take 36 damage.

The second way that the boss can deal damage to you is by standing next to a crane. The cranes are stationary and can hit up to 25 damage, but they are inaccurate and easily avoided by staying out of their reach.

Additionally, pickaxes will be constantly thrown at you during the fight, hitting as much as 10 damage in one attack, so, even though it won’t protect 100%, Protect from Missiles is recommended for this fight. Magic attacks are very effective against him.

The ghost will continually teleport after some hits are dealt and the more the fight progresses, the sooner it will teleport, sometimes even after one hit, which is where weapons with a high maximum hit will come in handy, which makes killing this boss very difficult without energy/super energy potions.

After defeating Treus Dayth, pick up the innocent-looking key, which in fact is the crystal-mine key. Now, head back east through the door and climb up the stairs. Walk west until you reach another staircase and head down. Walk down the corridor.

The crystal-mine key opens the large door to a room with a crystal outcrop in the south-east corner. Use a chisel to cut a piece from the crystal outcrop. If you forgot your chisel, go back up the lift and pick a chisel on a crate. You will obtain a salve shard. Be sure to cut extras for backup! Quest Complete!

Rewards For The OSRS Haunted Mine 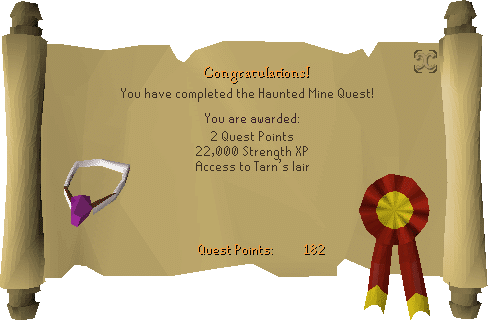