The OSRS King’s Ransom quest is the last part of the Camelot quest series. During this guide, you will be like a detective who is trying to solve a mystery but in the ancient Camelot. Because King Arthur and his Knights of the Round Table have disappeared and no one knows where they are.

To start the OSRS King’s Ransom quest you need to talk with Gossip outside the Sinclair Mansion, just northwest of Camelot Castle. He will explain to you that the Sinclairs have packed up and left after incriminating Anna as Lord Sinclair’s murderer.

This, however, may not be the same person you proved to be guilty in Murder Mystery. Gossip will explain that one of the family members provided new evidence to prove Anna’s guilt. He will then go on to explain that King Arthur and his knights disappeared at the same time as the family’s departure.

Agree to investigate, and you will start the quest. Open the gate and go talk to the guard, he suspects that since Lord Sinclair gave King Arthur the castle, the disappearances may be part of a bigger plot to reclaim Camelot.

The guard will explain that the Seers’ Council has forbidden anyone to enter Sinclair Mansion or Camelot to investigate and will then pass on the investigation to you. Go to the dog fence northeast of the mansion and break the window next to the dog fence.

Once you are inside, go to the dining room and on your mini-map, you will see a red dot in the northeastern corner. Go towards it and you will find a scrap paper on the floor, take it and exit the dining room. Climb up to the second floor and enter the library.

Take the address form on the table that was never filled out, proving that the Sinclairs left for good, and never intended to tell anyone where they were moving. Now search the western bookcase and you will find a black knight helm. If you did not read the scrap paper and address form do it now.

Go downstairs and exit the house through the window that you broke and by right-clicking the window and click on ‘break’ to go outside to the guard. Talk to the guard and give him all three pieces of evidence. The guard will agree that there is enough evidence to prove bad intent towards King Arthur.

He says that since he has to follow proper procedures that he will have to wait a month before presenting the evidence. You will offer to avoid bureaucracy. He will then suggest that you learn more about the Sinclair family history, suggesting that town gossips know much about history.

Talk to Gossip and you will see three options to ask him. Ask all three to learn the Sinclair history. Head to the courthouse in Seers’ Village located south-east of the bank, and speak to Anna. She will say that the original murderer you suspected set her up.

Ask her where her family has gone but she will not tell you unless you help her to get a not-guilty verdict during the trial. She will then hand you the criminal’s thread that you found on the window in Murder Mystery. Anna will suggest that the servants may be able to provide testimony in her defence.

Walk down the stairs in the courthouse, and the trial will begin. During the trial, you will call witnesses by talking to the judge and question the witness by talking to the witness. To get a not-guilty verdict, you must disprove the evidence provided to do that: Call the butler as a witness, and ask him about the dagger.

Then call the dog handler, and ask him about the poison. Call the maid, and ask her about what she saw the night of the murder. After that call anyone and ask about the thread to complete the case for the defence. The judge will end the trial and ask for a verdict. The jury will provide a not-guilty verdict against Anna.

Leave the courtroom by clicking the gate and then, talk to Anna in her cell. She will go back to being rude but will tell you how to enter Camelot. Head to the east side of Camelot Castle, and search the statue near the temple.

You will now see a cutscene of Anna talking to David. The siblings were both responsible for Lord Sinclair’s death and set you up to trap you. They will explain they have no intention to help you. Suddenly, Morgan Le Faye will appear and knock you out with her staff.

After being knocked out by Morgan Le Faye, you will wake up in jail with Arthur’s Knights and Merlin. Speak to Merlin and he will explain that King Arthur has been turned to a granite statue and taken away by the Black Knights.

Ask Merlin what to do and follow all of the available conversation options. Go to the northern wall and you will see a vent, left-click on the vent. This will trigger a cutscene in which Merlin escaping with the help of all the knights making a pyramid allowing him to reach the vent.

After that talk to all the knights in the jail, and ask them if they have anything useful to help them escape. You will get a lot of items from them but the item you need from them is a lockpick. Use the lockpick on the metal door to escape with the knights.

If you don’t get a lockpick from the knights, use Telekinetic Grab on the guard who is fixing his hair outside the cell to obtain a hair clip. Then use the hair clip on the metal door. To unlock the jail lock you must solve a puzzle, to complete this puzzle, you must set each of four tumblers to the correct height.

The most foolproof way to do this is to set all tumblers to the lowest height of 0/5 and try the lock. If a tumbler shows a green circle, do not change that tumbler anymore. Ignore blue and red circles. For all the other tumblers, increase the height by one and try again.

Continue until the lock unlocks. This method will take at most six attempts. When you manage to unlock the door you will appear on the ground floor of the Keep Le Faye. So climb up the stairs and go to the top floor.

Search the table in front of you to solve a riddle (click on Show riddle) and choose the correct container holding the holy grail. The correct box is the round purple one on the right, second last box if counting from left to right.

The last part of this quest is to free King Arthur from his stone prison. To do that you must go to Wizard Cromperty in East Ardougne. You will recognize the building by the blue tiles on your mini-map.

Talk to the wizard in the building and he will give you an animate rock scroll that you will need to use on King Arthur once you have both the holy grail and some granite in your inventory.

Then, put on your black equipment, and push the wall right behind the guards’ door. You cannot push the wall if you are not wearing full black armour. Climb down the ladder, and you will see King Arthur’s statue. Use the free option.

Talk to King Arthur, and give him the guard uniform (bronze med helm and iron chainbody). Return to Camelot and speak to King Arthur in his castle to finish the quest and receive your reward.

Rewards From The OSRS King’s Ransom 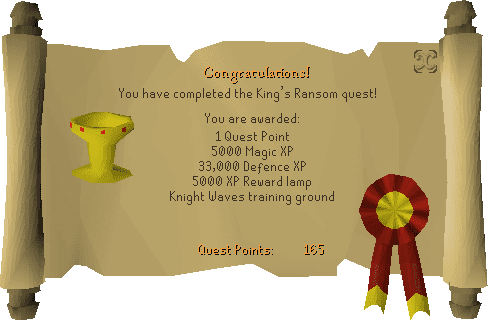