Very often the title of the quests made by Jagex is giving you an indication of what you will be doing in that quest. Anyway let’s talk more about the OSRS Observatory Quest, the first thing that you should know is that this is a very easy, short, and fun quest.

The OSRS Observatory Quest has no quest requirements, during the quest you must help the Observatory professor to repair the Observatory in south-west Ardougne that has been ransacked by a family of nearby goblins.

The professor says that he needs some wood for the tripod, bronze for the tube, and glass for a new lens. Now talk to the professor three times (assuming that you have all the items in your inventory) to give him the three items he asks for. Talk to the assistant to find out where you can get the stolen lens mould. The assistant will tell you that one of the goblins hides it somewhere in the Observatory Dungeon.

Go east to the dungeon sign, if you don’t have antipoison potions, you can pick up one Superantipoison (shown as a red dot on your mini-map) at the southeastern building. Climb down the staircase, once inside the dungeon go south and then southeast.

Follow this path until you reach the end where you should find a chest. Open the chest and inside you will find a kitchen key if it’s not in this chest keep searching the chests in the dungeon until you find the key.

When you have the key in your inventory go back to the staircase and take the northeastern path. Follow that path until you reach a small room with a sleeping guard. Right-click and prod the sleeping guard, then lure him north to the little stick-out wall so he can get stuck behind it.

Once he is north, run back south and go through the gate. Next, inspect the Goblin stove and you will find the missing lens mould, take it and go back to the professor. His assistant will ask you not to give it to him, as last time the professor attempted to craft something, the explosion took a week to clean up.

Make your way back to the dungeon and go to the Goblin kitchen, from there follow the path west until the path splits. Then take the western path and go all the way south until you reach a staircase.

The constellations are on wall charts in the main level of the Observatory. Identify your constellation, talk to the professor again, and you should get your reward in your inventory. 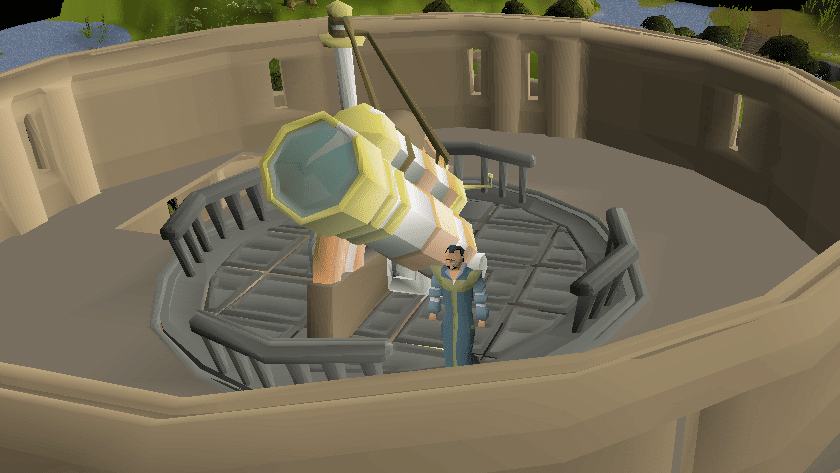