To start the OSRS Rag and Bone Man 2 quest go to the Odd old man’s house and read his Wish List that is attached to the house. The list will tell you which monsters you need to kill and collect their bones. As I did in the previous quest guide I will list all 27 monsters and the bones you need to collect here:

Let’s start with killing some bats located south of the Odd old man house, you need to kill more than one bat to get a bat wing. Use your Ectophial to teleport to Port Phasmatys and head west to kill undead cows and take the undead cow ribs.

When you’re done continue going west and after the water drop sign on your minimap, you will see some memorial monuments. Right-click and push the most eastern memorial and you will go inside a cave. Run north and start killing the experiments until you get an experiment bone.

Exit the cave and run southwest to Canifis, now you need to kill werewolfs but make sure to kill them in their werewolf form and don’t use a bone dagger or you won’t get the bone. Once you are done that run west until you reach the Canifis graveyard northwest of the transportation sign.

There you will find ghouls, kill a few of them until you get the ghoul bone. Head to the transportation sign and use the fairy rings with code AIQ. If you don’t have access to the fairy rings, you will have to walk to Mudskipper Point.

Once you are there use your fishing explosives on the ominous fishing spot and Mogre will appear. Kill him and take the Mogre bone, if it doesn’t drop it the first time continue fishing until you have the bone. Use the fairy rings again code ALP, and this will take you to the Lighthouse.

Go southwest until you reach the tree sign, and now kill some rabbits to get a rabbit bone. Next, go east of the fairy rings towards the Slayer Dungeon but make sure that you have your Mirror shield. The dungeon requires you to have level 40 Slayer, so keep that in mind.

Once inside follow the path west until you reach the Basilisk. Go ahead and kill them until you get their bone drop. Now teleport to Falador, you can go quickly to the back and free some inventory space. You can bank your bones you have collected, your mirror shield, and your fishing explosives.

Also, make sure that you take your dusty key because we are going to the Taverley dungeon now. Exit the bank and run south to the agility shortcut and then northwest until you reach the dungeon sign. Climb down the ladder and run north until you reach the prison door, go inside and take the southeastern path.

Follow that path until the path splits, then go south and follow the path until you reach the room with the blue dragons. Use your dusty key to open the gate, equip your dragon fire shield and then head west. Right next to the fishing signs start killing some baby blue dragons until you get the baby dragon bone.

Next teleport to Lumbridge and head down to the Lumbridge bank below the cook’s room. Climb down the ladder, from the bank you need a rope and a light source of any kind. Go to the mines by squeezing through the hole in the wall and talk to Kazgar to ask him to show you the way.

Kill the Cave goblins until you get Cave goblin skull, next use your game necklace, and teleport to Barbarian outpost. Go all the way south to the Fishing Guild, and on the west side of the guild, you will find some Moss giants. Take a Moss giant bone from them and go a bit north to the house with the quest sign.

Make your way to Camelot and run to Catherby bank to free some inventory space. Go to White Wolf Mountain and first you need to kill some wolfs, there is one when you first come up the mountain. Also, there are wolfs a bit north up on the hill, after you take a Wolf bone head to the north side of White Wolf Mountain.

Where you should see some Ice giants, you can safespot them and attack them by standing beneath the hill. For this, to work you have to kill them with magic or range. Then just use a telekinetic grab to take the Ice giant ribs.

Use the fairy rings again and dial in the code DLQ and you will be teleported to the Kharidian Desert, north of Nardah. Once you are there run north and kill level 42 Lizard to get a desert lizard bone. Make sure to have Ice coolers because when you hit 90% damage to the Lizards they will not die until you put an Ice cooler on them.

Now you need to go all the way south to Nardah. If you worry about the desert heat go to the bank and take a waterskin. Also, make sure that you have magic or range weapons. Go west of Nardah where there is a small area with Jackals, kill a couple of them until you get a Jackal bone.

After that head southwest where the Vultures are, you can see that there is a marked spot on the map (named Vultures). To kill them you must use magic or range because they fly around, take a vulture wing and then teleport to the duel arena. From there head to the gnome glider and go to the Karamja jungle.

Run west into the jungle and kill some snakes until you get a snake spine. A bit to the west next to the snakes you should find a couple of Jogre’s, so you need to kill them to get a jogre bone from them. Go to Castle Wars via a ring of dueling and bank all the bones you have collected and take an Ogre bow and arrows.

Then run south from the Castle wars to the quest sign on the map and then head to the east towards the crush barricade. Here you will find a Zogre which you can kill with your Ogre bow and then use telekinetic grab to take the Zogre bone.

Next teleport to Castle Wars and from there go south, run past the bridge and then east to the Ogre training spot. Now kill some Ogre until you get Ogre ribs. Go to Draynor Village and run to Port Sarim docks to kill Seagulls. Take the Seagull wing and go to Varrock, and then head towards Varrock Sewers.

Climb down the manhole and start killing rats until you get a rat bone. Next, go to the Gnome Stronghold and run southwest to Terrorbird pen next to the tree sign. Take a Terrorbird wing from them and teleport to Burthorpe.

Go northwest towards Death Plateau, on your way to the top make sure that you activate Protect from Range because of the guards that will throw rocks at you. Once on top kill some mountain trolls to get a troll bone.

Lastly, make your way to Draynor Village and go east to the Draynor Sewers (dungeon sign) next to the jail. Open the trap door and climb down, and kill the zombies to get a zombie bone.

Once you have collected the bones, run to Draynor Village market and talk to Fortunato. He will be able to sell you some jugs of vinegar for 1 coin each. Buy 27 of them. Do not steal from the market stall or he will not talk to you for a while. In addition to the vinegar, collect 27 pots, 27 logs, and a tinderbox.

Take the pot from the pot-boiler to receive the polished bone. Repeat this for all remaining bones. Talk to the Odd Old Man to give him the bones. Once all 27 have been given to him, choose your reward. 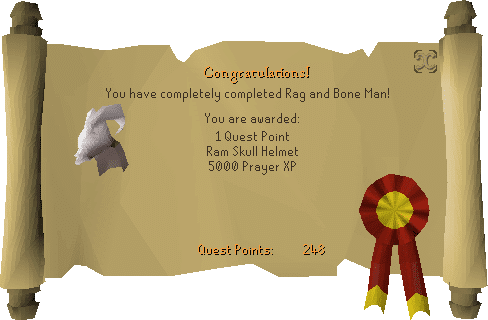