The OSRS Rum Deal quest is a part of the pirate quest series, and during this quest, you will have a very important task to keep the peace and get the rum brewer going again. Why is that? Because a large number of zombie pirates have recently appeared, demanding the factory’s ‘rum’.

Since then, the brewery has not produced any rum, and a band of angry, protesting undead pirates stake out Braindeath Island. Will you be able to overcome the horde of drunken, undead pirates? Can you even get to the island without getting a headache?

To start the OSRS Rum Deal quest you must talk to Pirate Pete at the dock north-east of the Ectofuntus (north of Port Phasmatys). Talk to the Pirate Pete and agree to help him, then refuse the money he offers you.

He will knock you on the head and take you to Braindeath Island after the cutscene, talk to Captain Braindeath. He will tell you that he needs to make some “rum” to get Captain Donnie drunk. You will have to gather the ingredients to make the rum. The Captain will give you a seed to grow a blindweed.

Exit the small room and head west towards the ladder to climb down, go to the southeastern corner of the basement. There you will see a red dot on your mini-map, next to that red dot you will see a cupboard. Search the cupboard and take all the items from it.

Go back upstairs and run south to exit the building and then go southwest to the farming patches. Almost all patches will be unusable except one, the most southeastern one. Use your rake on the farming patch and when you are done, plant the blindweed seed on the patch.

You need to wait five minutes for the blindweed to grow and then pick it. After you have taken the fully grown blinkweed, go back to the Captain Braindeath and talk to him.

He will tell you to put the blindweed in the hopper, so head to the southeastern corner where you will find a ladder. Climb up the ladder and go all the way to the northwestern corner, use the blindweed on the hopper next to the pressure barrel and go back to the captain.

Captain Braindeath will tell you that the next step is to get a bucket of stagnant water, he will then give you an empty bucket. You can drop your farming equipment now because you’re not going to need it anymore. Go outside of the building and run northwest until you reach the bridge.

Talk to 50% Luke who is guarding a small gate and then go through the gate. Keep going north and then go northeast until you see four rocks on your mini-map, you should see (to the north) a slightly darker grey path.

Follow that path up the mountain and you will see a water sign on the top, use your empty bucket on the stagnant lake to get stagnant water. Head back to the brewery and put the water in the hopper, and talk to Captain Braindeath.

Captain Braindeath will tell you that you need to catch five loads of sluglings and will give you a fishbowl tangled in a big net. Go back outside and head to the fishing sign next to the farming patches, and start fishing until you have five sluglings.

Go back inside and climb up to the second floor to put the sluglings in the pressure barrel (next to the hopper) and pull the lever. Next, climb down to the first floor and report back to Captain Braindeath.

The captain will tell you that the controls for the brewery have become possessed. He will give you a wrench to beat the controls with it. Head to the west side of the house and get your wrench blessed by Davey.

He will only bless the wrench if you have 47 or more Prayer points, not just level 47 in Prayer. Now, go back into the brewery and in front of you, there is a machine that is spinning uncontrollably, beat the controls on the machine with your bless wrench.

Once you have done that Evil spirit will appear, he will attack you so use protection from Melee and kill the Evil spirit.

Now that the “rum” is complete, he will give you a bucket to collect rum from the “output tap” at the south end of the machinery. Head outside where the protesting zombies are and find Captain Donnie to give him the “rum”. After some dialogue, he will tell you the name of his boss. Return to Captain Braindeath to claim your reward. 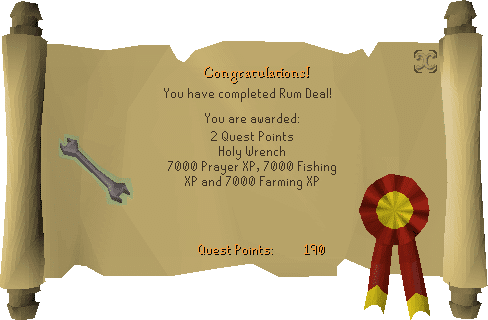